It is no secret that the Allen Coral Atlas has a love for the rightfully named “rainforests of the sea.” Coral reefs provide humanity with many core benefits from providing food security for reef fish to stimulating the economy through tourism and much more. Yet, science forecasts a bleak future for reefs. Models predict that without intervention, 70% to 90% of coral reefs will be lost in the next 30 years due to warmer, polluted, and acidic ocean waters.

Despite these discouraging forecasts, the coral conservation community has remained dedicated to not only protecting coral reefs, but bringing them back stronger and more resilient than before. The Allen Coral Atlas unites five partners committed to coral reef and ocean conservation: Arizona State University, Vulcan Inc., University of Queensland, Planet, and the National Geographic Society. Through this collaboration, we now have an unparalleled new tool for coral reef conservation.

On May 19, 2021 the Allen Coral Atlas released the world's first satellite-based global coral reef monitoring system. This monitoring system works alongside the Atlas’ reef extent and composition maps, which feature crucial reef data such as benthic habitat maps, geomorphic zone maps and quarterly turbidity. Together, the full suite of Atlas tools  provides a comprehensive and unprecedented picture of coral reef change over time. Armed with this new information, the coral community will be better equipped to actively respond to coral reef threats with targeted conservation efforts in the most vulnerable areas.

What is the Atlas Monitoring System?

The Atlas monitoring system detects variations in reef brightness using high-resolution satellite imagery powered by an advanced algorithm indicating whether reefs are under stress caused by marine heatwaves. With this tool, users can see where corals are bleaching at a global scale and in bi-weekly increments from January 2021 onward.

“Our ability to monitor changes in coral reef condition has always been a clear but challenging requirement to drive decisions on where to apply our best restorative and protective strategies,” said Dr. Greg Asner, Managing Director of the Allen Coral Atlas, and Director of the Arizona State University Center for Global Discovery and Conservation Science. “The new Atlas Monitoring System is a major step in our effort to bring eyes to the reef at a global scale and yet with extraordinary detail needed for progressive reef interventions.” 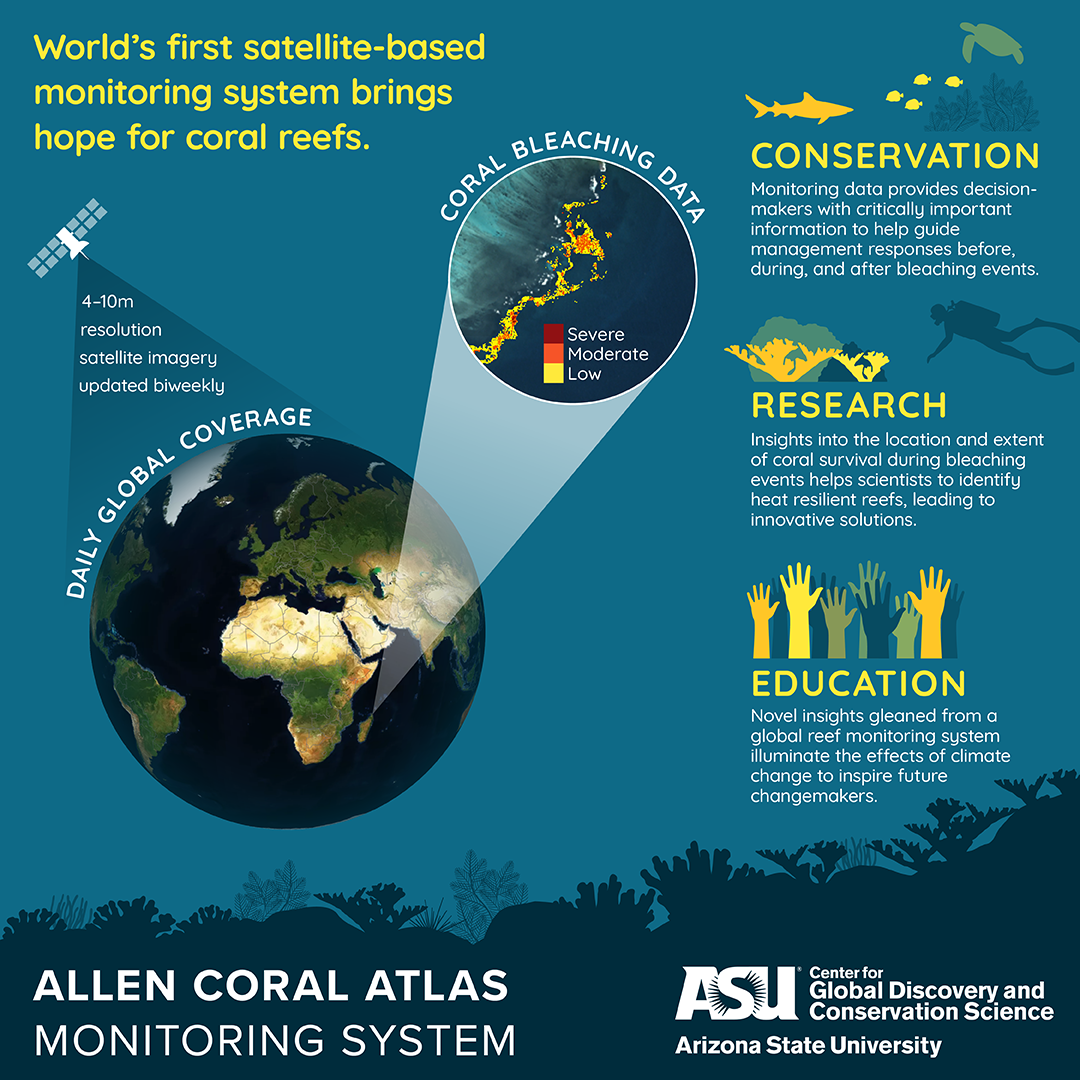 Using imagery from numerous satellites at 4-10m resolution, Atlas data are comparable across marine regions. These data can then be utilized for education, research, and conservation purposes.

Behind the Scenes and the Monitoring System in Action

The Atlas piloted a beta version of the monitoring system across the Hawaiian Islands during the 2019 Pacific Ocean heatwave that revealed bleaching, “hotspots.”

The beta version tested the development of an algorithm designed to identify brightened pixels in high-resolution satellite imagery. NOAA Coral Reef Watch (NOAA CRW) temperature anomalies established baseline data of  “no stress” bleaching periods used for comparing bi-weekly satellite imagery processed with Google Earth Engine.  “Every two weeks, we process a clean mosaic and look for pixels that have brightened consistently over the weeks that we monitor.” shared David Knapp, Senior Scientific Programmer. “We also check the NOAA CRW data every two weeks to see which regions around the world are at a bleaching status of “warning” or higher and we process the data for those regions until they are no longer in that status.”

Through testing the beta version, we developed a temporally dynamic and globally comparable monitoring system of coral reefs. As a global tool, this system will allow conservationists and policymakers to more quickly identify where to scale-up restoration efforts and offers users the ability to compare reef ecosystems from one year to the next, providing a clear understanding of major trends and changes. 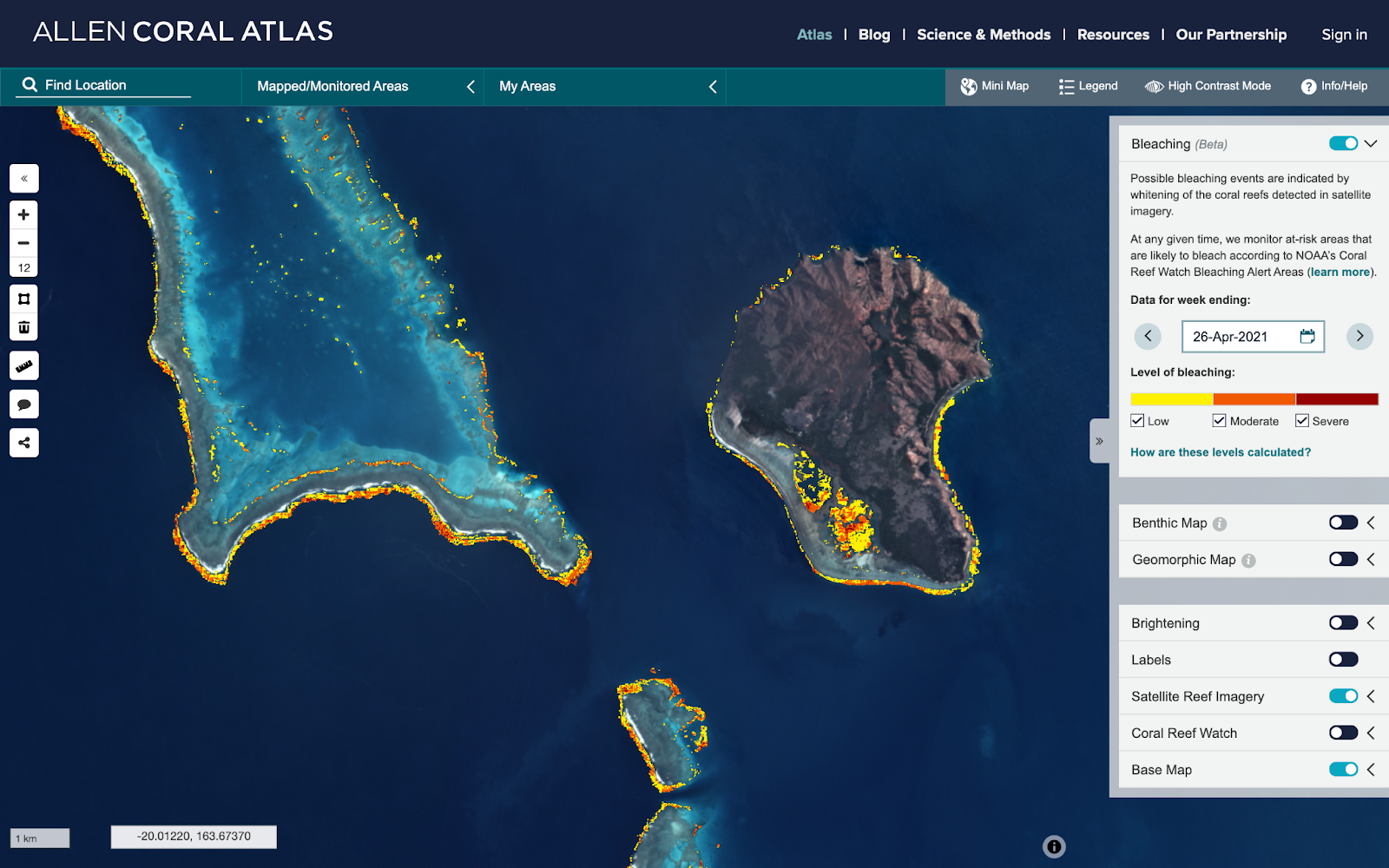 “This monitoring capability will help us to see, for the first time, where and to what extent coral bleaching is likely to be occurring as well as where it isn’t bleaching so we can identify resilient reefs,” commented Paulina Gerstner, program director for the Allen Coral Atlas. “The system is the outcome of years of effort involving our ecologists, remote sensing scientists, software engineers and many others.”

The monitoring system will be an invaluable resource for coral reef education, research, and conservation. And the Atlas plans to continue producing innovative tools for the coral community.

“It’s important for people to understand that this is just the first version of our monitoring system. We intend to improve and expand it to include a broader range of impacts on reefs such as land-sea pollutants and sediments,” said Asner. “This first reef monitoring system is simply a drop in the bucket for what is to come.”

By looking to the Allen Coral Atlas as a new tool for collective response, we believe in the potential of the coral community to change the narrative of the next 30 years and save the “rainforests of the sea.”

Stay tuned for more Atlas innovations and join our coral community on social media.  The Allen Coral Atlas is active on Instagram, Twitter, LinkedIn, and Facebook.