This Earth Day, we share a story of our Allen Coral Atlas scientist Dr Emma Kennedy who recently took time out from mapping coral reefs to participate in a ground-breaking expedition to Antarctica – one of our planet’s last great wildernesses - to learn how to better protect the planet.

The freezing white expanse of Antarctica couldn’t be more different from tropical warm seas and colorful corals that our resident marine biologist is used to… so what do penguins have to do with pixels?

Coral reefs are in crisis. Even as our Allen Coral Atlas team works hard to map the planet’s reefs, the Great Barrier Reef is undergoing its third severe mass bleaching event in five years. Frequent bouts of bleaching erode the very fabric of the reef – the coral “ecosystem engineers” on which these complex systems are founded – and deny these slow growing organisms the time to recover.

Scientists have known about the dangers of mass bleaching for decades, and have been making increasingly frantic calls to take action since 2007. The problem (warming ocean temperatures due to rising greenhouse gas emissions) is well documented. Also well understood are the steps needed to address the issue (rapid transition off our reliance on fossil fuels), and the consequences if we fail (most reefs dead by 2050, and half a billion people’s associated livelihoods undermined).

And yet, as a planet, we’ve failed to act.

The question is: Why?

One theory is a lack of global leadership. Analyses have shown trust in our leaders has eroded to an all-time low (86% of people surveyed had lost confidence in governments and international institutions). Even with global activism movements like Earth Day, many of us feel that people who don't share our values or understand the science of climate change are making decisions that determine our future.

Leadership initiative Homeward Bound aims to address the leadership crisis head on, providing expert-led training to equip cohorts of potential future leaders with the knowledge and support to lead “for the greater good”.

One of our Allen Coral Atlas scientists, Dr Emma Kennedy, was selected to take part in the ground-breaking year-long development scheme. Emma was part of the fourth group of STEMM-workers (science, technology, engineering, medicine and maths) selected from 33 different countries for the prestigious program, which aims to create a global network of women in science who can influence policy and decision-making in the environmental space. 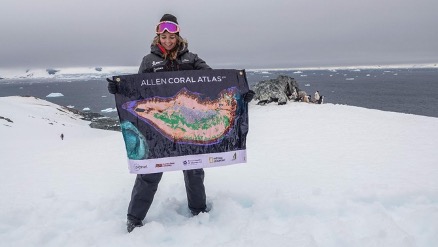 Research scientist Dr Emma Kennedy takes time out from on-board seminars to venture onto the ice to meet some penguins!

By specifically targeting women – an underrepresented group in leadership (of 193 political leaders just 10 are women), the program hopes to bolster leadership diversity, which has been shown to affect positive outcomes. Program participants received online training and peer-to-peer coaching throughout the year, meeting for the first time in late November in Ushuaia, Argentina. The final intensive training component of the program was delivered on a three-week voyage to Antarctica – one of our planet’s last great wildernesses.

Emma shared, “The women I met - including CEOs and students, academics and activists, farmers and firefighters - changed my whole outlook on life with their passion, courage, capability, relentless optimism and appetite to make a positive difference.”

Across the planet, women are one of the groups set to be disproportionately impacted by climate change. But they are also likely to play a disproportionate role in the solution. Women researchers are making significant contributions to major scientific assessments such as those of the Intergovernmental Panel on Climate Change and the Millennium Ecosystem Assessment, and leaders like Christiana Figueres and Greta Thunberg are showing a way forward. Women’s voices - even those of a farmer, a zoo biologist and a diver - are important, with the UN actively calling for more women to step up to be part of the climate solution.

The freezing white expanse of Antarctica could not be more different to the tropical warm seas and colorful corals that marine biologist Emma is used to. Daily interactions with penguins on the ice were intermingled with on-board lectures and classroom work focusing on four key development components: leadership, strategy, visibility and science collaboration. 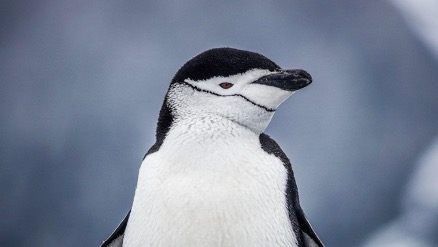 Just like coral reefs, the polar ecosystems are particularly vulnerable to a warming world. Chinstrap penguins are becoming rarer on the Antarctic Peninsula as their icy environment becomes warmer and wetter.

Over 10 years, Homeward Bound's vision is to build a global network of 1000 women with STEMM backgrounds. Emma said the greatest leadership lesson she learned was how to convert despair over coral reefs into determination.

“I'd become overwhelmed by how impossibly big our challenge was for coral reefs. Most coral reefs have degraded significantly in my lifetime, and even if we adhere to Paris Climate Agreement, we're on track to lose 70-90% in the next 30 years as the planet warms.”

But that doesn’t stop her. Emma believes giving up hope “is not an option: I learned we just need to do what we can to tackle the reef crisis one bite at a time. This is why projects like the Allen Coral Atlas are so critical – our products will underpin important science and conservation which will help make a difference. Every piece of the puzzle is vital, and we need to continue to dedicate each day to laying down the foundations to build a better world”.

To people like Emma working tirelessly on Earth Day - and every other day - to ensure that we don’t lose coral reefs, penguins and glaciers, thank you! 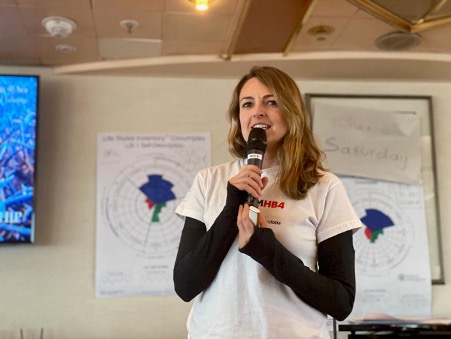 An on-board “Symposium at Sea” was a chance for Emma to present some of the latest Allen Coral Atlas research and products with the 98 other program participants – sparking conversation and collaborations.

Emma’s trip was funded by ACA partner University of Queensland’s Global Change Institute, UQ Faculty of Science and Athena SWANN program. And of course, being on the mapping team Emma made sure to map her journey: you can follow Emma’s route around Antarctica  and read more about the wildlife she met and lessons learned in her interactive blog-post here.