There is a Tahitian myth of a young king, Rata. He became king after his father and uncle ventured beyond the reef and were swallowed by a giant clam on their way to Pitcairn. Rata grew up with an appetite for revenge. One day, he captured forest elves and they built him a canoe from a tree that he admired. The elves were magic, of course, and it only took them one night to construct it. Rata set sail for Pitcairn at sun-up. He found the monster mollusk, with its neon purple serpentine-shaped lips. Those lips plucked Rata from the sea and slurped him down; past a world of iridescence and into a dark belly. With his spear, Rata sliced his way out of the clam, then rescued the remains of his father and uncle. He sailed home beneath a red sky of victory. 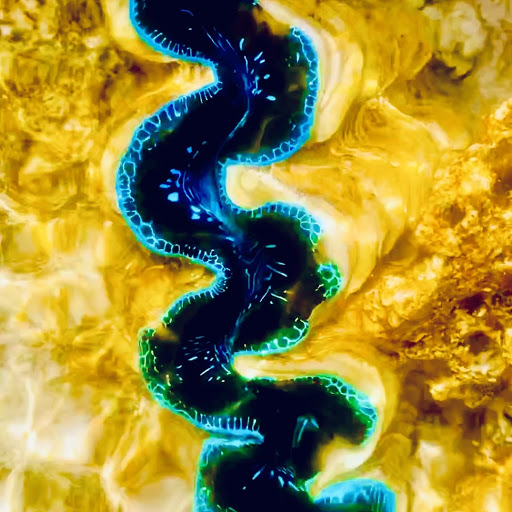 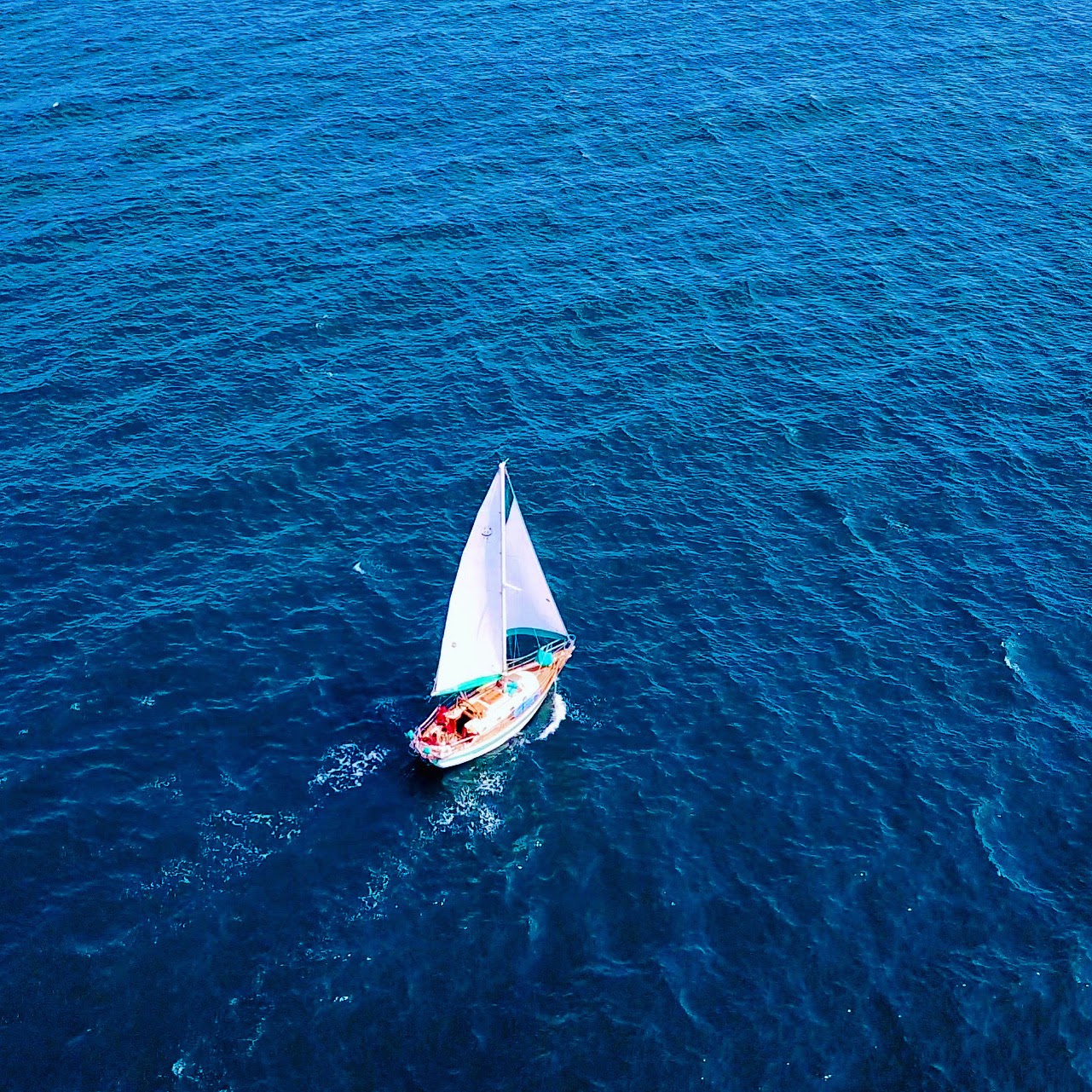 I recently became hot with fever for this creature, the giant clam. These psychedelic mollusks are not monsters at all. Their shells help build and shape coral reefs, and their presence alone signifies a healthy reef. In the heart of French Polynesia exists a world full of them, the Tuamotus Archipelago.

I am sailing towards these coral islands aboard my 34 ft. sailboat, Juniper, along with Brianna Bambic of the Allen Coral Atlas team. Our mission is to collect data of these mollusk-filled reefs and meet the people born to them.

The Tuamotus rest at the edge of the ring of fire and are the largest chain of coral atolls on earth. They are sunken volcanoes that began to take shape as dinosaurs were dying - 65 million years ago. They started as seismic shatterings, bubbling on the seafloor. There was eruption after eruption and lava piled upon lava, piled upon lava; then climbed out of the South Pacific Ocean. Growing upward until the volcanoes no longer breathed fire. Coral began to colonize around the shorelines of the inactive volcanoes. Seabirds came and went too, so there was soil and seeds and sprouts and flowers. The volcanoes turned into tropical islands bathed in emerald green and they were surrounded by underwater jungles made of coral. With time and rain the volcanoes eroded, and slowly sank, until they disappeared, leaving behind a ring of coral and a lagoon where the volcano used to be. 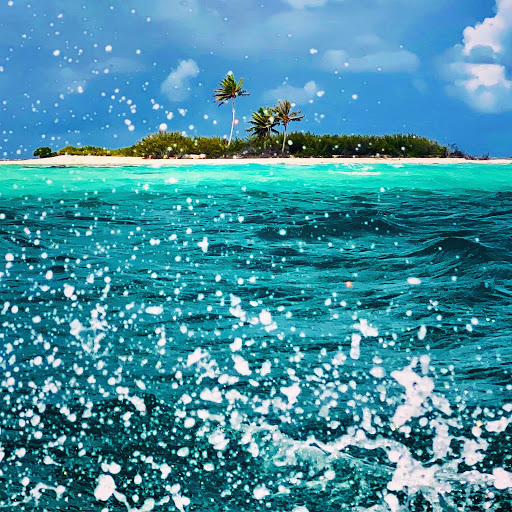 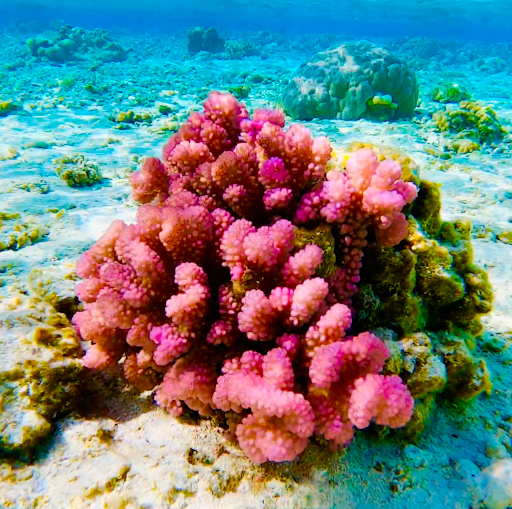 The Tuamotus are called the “Dangerous Archipelago” because many don’t rise beyond the level of the sea. They dissolve, like everything, inside of a squall. The currents surrounding them are fast and fierce and ships often wreck near their shores. I think about all of this as we sail towards them, into the throat of the wind, with rainstorms abound.

How Polynesians discovered these atolls in the middle of this sapphire sea, remains a mystery to me. Equally impressive is how they initially navigated into the pass of each atoll and later navigated between them by memorizing ephemeral nautical maps. These maps were lines drawn in the sand and they used broken pieces of coral to mark the islets (motus) and other hazards.

Brianna and I loosely follow digital navigational charts, knowing that much of the reef in that area is uncharted by modern technology. We sail until we are soaked. After two days, we see palm trees on the horizon and prepare to enter our first pass. We enter on an outgoing tide. Waves crash onto the outer reef. Saltwater swirls into whirlpools as it rips around coral inside the pass. There are moments when we are neither going forwards nor backwards and it feels like we are sailing through a river of sand. 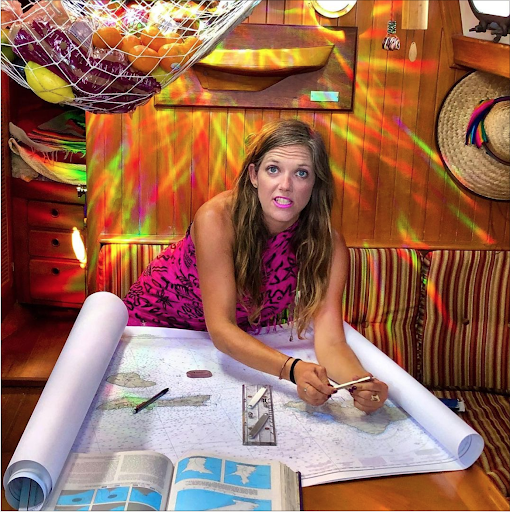 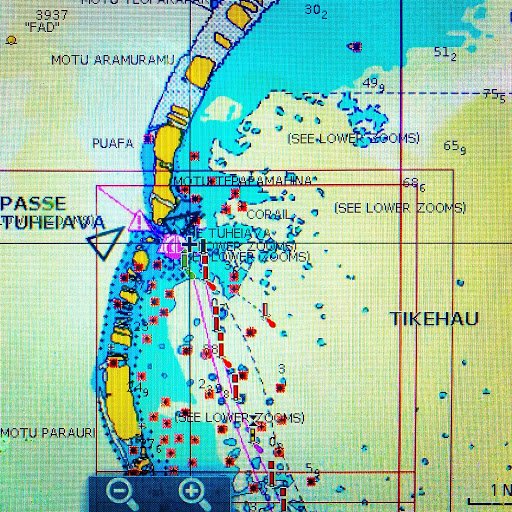 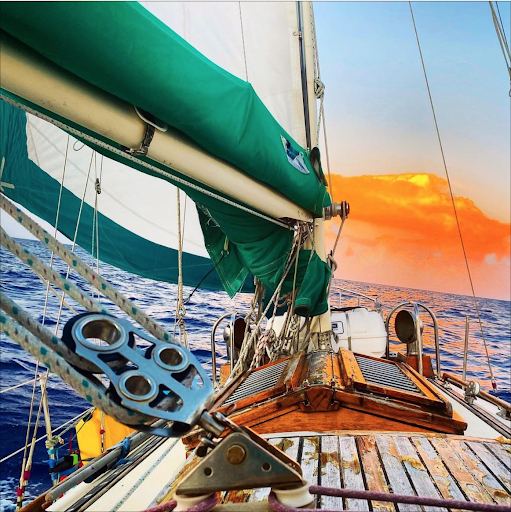 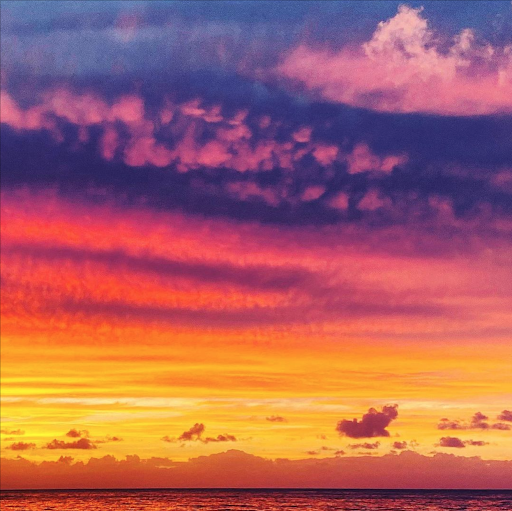 Beyond the pass, the lagoon is the tone of turquoise for as far as we can see. It’s thick with life. Noodies and red footed boobies soar above. The beautiful and the dangerous and the beautifully dangerous, beneath us. We continue on towards the anchorage, dodging fish traps and coral bommies. We drop the hook, it sinks, I reverse. Blacktip reef sharks and unicorn fish float all around us.

Next to our anchorage is a fishing village. It’s made of seven sea shanties built on top of ghost-colored coral. We swim to it. We walk through it. We find a waving hand, fishing buoys suspended from trees, a palm forest, a smile. We meet a family, who use the reef pass and the new moon to corral fish into traps. They have done this for so many generations that the symbiotic relationship between them and the reef is an afterthought.

We keep walking. The tide is low and the coral sounds like glass beneath our feet. Shallow pools of water distort the shoal and at the same time reflect the sky above. At the edge of the outer reef there is pink sand that sinks like mud. Hidden creatures are exposed. A young Tahitian boy taught me that if I sing songs to the hermit crabs, they will pop out of their shells. I pick one up. I sing her a song. La-da-da-da-da. She slides out of her shell and her claws reach for my face. I set her down. She scatters.

The lagoon is a crystal and the water calls. We plunge into it. Snorkel, mask, fins on. Georeferencing tools in hand. Underwater is a lush rainbow. Coral – purple, green, yellow- pops into music. Giant clams spread out like the flames of wildfire. Schools of fish small and large.

We plant fallen pieces of coral into empty crags. We stare at a wrasse with a head full of magenta zig-zags. The sun glints and glitters. There are pink bubbles and blue wings. A manta ray swims towards us. Our eyes get lost inside his flying-saucer mouth. He dives back down.

We dive down too. We take photo after photo after photo. Documenting the reef - in a straight line, in circles, in waves- from shelf to edge to break.  Floating above us, is a GPS. Our underwater images of the reef will be georeferenced with satellite images. Gaps will be filled and a map of the reefs will be made. 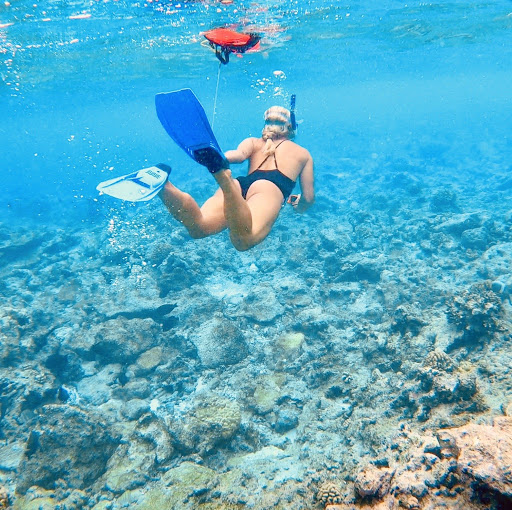 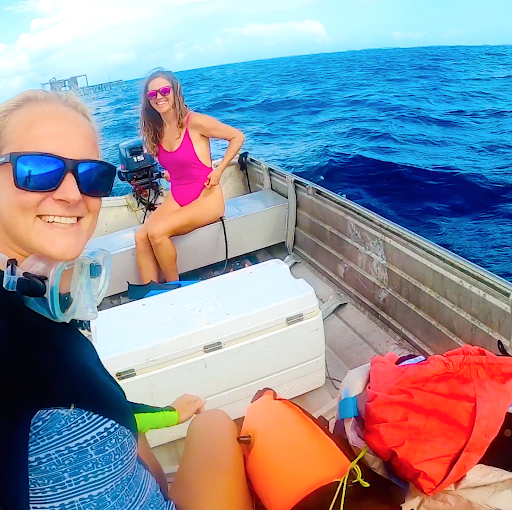 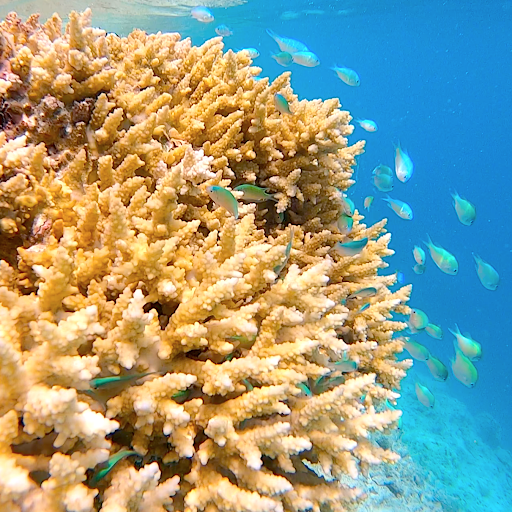 Water rushes past us, from lagoon to ocean. We float with it. Through the pass on the day's last outgoing tide. We let the current suck us out to the break. Bodies in the shape of a starfish. We need not move, for we levitate and are carried, like clouds, blown by a strong breeze. We are blown past sharks and sea snakes. Past parrot, puffer, butterfly, and Napoleon fish (humphead wrasse).

There is a spearfisherman at the mouth of the pass. We watch him shoot parrotfish, until we shake and the sun sinks and the silvertip sharks rise. Everything is hungry at sunset. 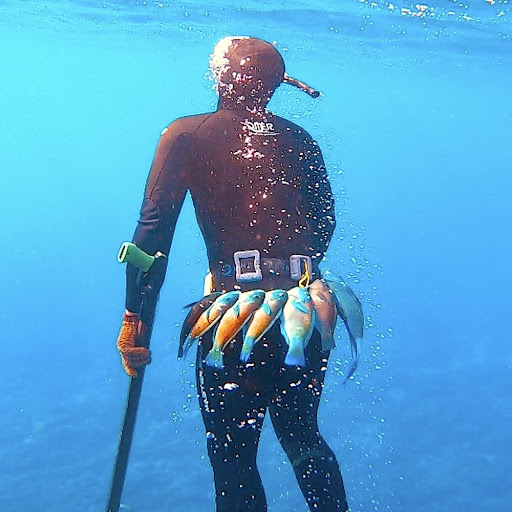 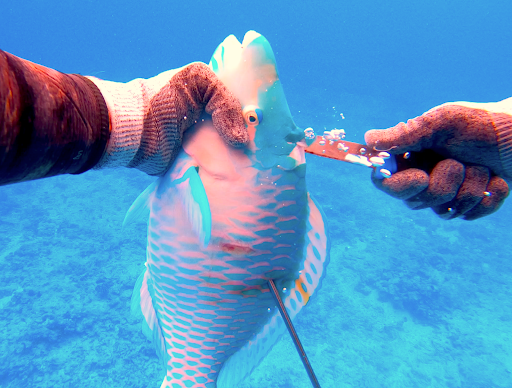 The spearfisherman lives across the lagoon, thirty minutes away. It’s dark and he’s headed home. The roads here are all made of saltwater, the cars are all boats, and coral grows like ice all across the lagoon.  I offer him a headlamp. He tells me, “The light is in my head… the map home is in my head.” He has memorized every piece of coral in the lagoon. I think about the things I’ve memorized on my routes home. Nothing as poetic as this.

The Tuamotus are a multitude of magic. To say that life revolves around the coral reefs is an understatement, the reefs are what breathe life into existence there. The entire ecosystem spirals outwards from reef to mollusks to fish to sharks to humans. Houses are built on the reef, food is gathered from the reef, oysters are farmed for black pearls inside the reef. Without the reef, there is no life. 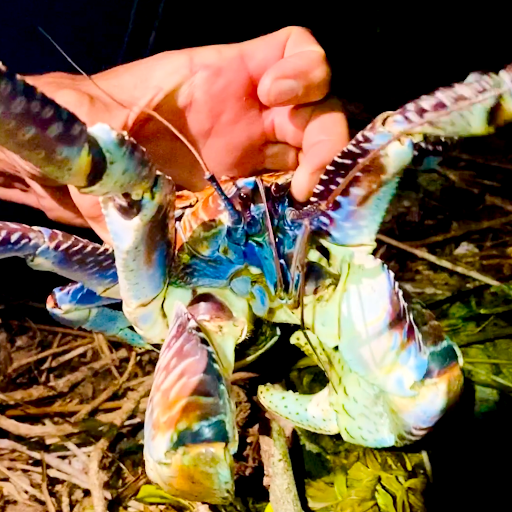 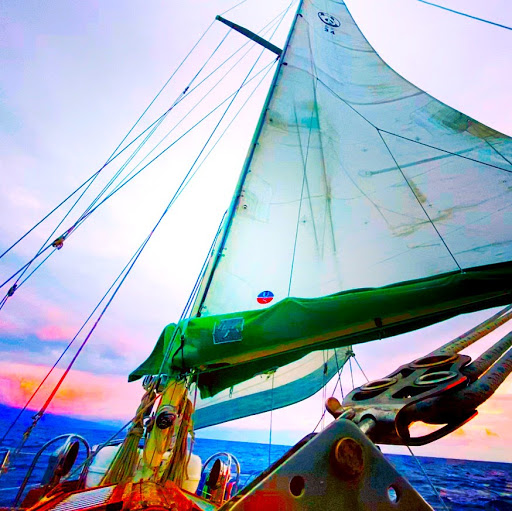 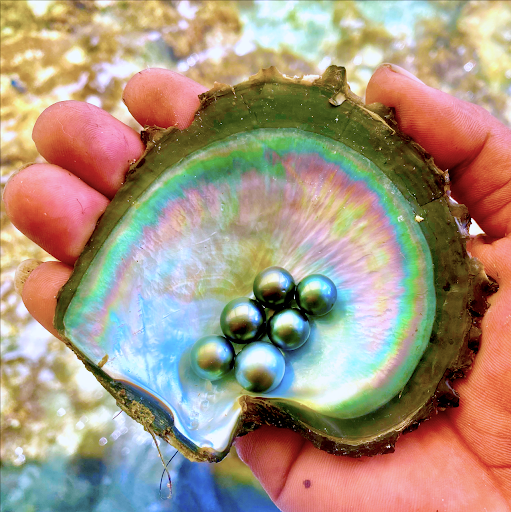